A shuttle bus is also available from Takuma Station (30-40 minutes).After getting off at Kamonokoshi, it is about a 10-minute walk.Takuma Line Time Table

※There is a private cab service from Takamatsu Airport to URASHIMA VILLAGE.

※You can also make a reservation for a rental car from Takamatsu Station or Takamatsu Airport. 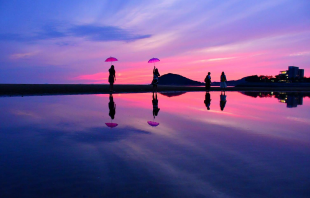 About 10 minutes by car from URASHIMA VILLAGE

The tide pools that form at low tide look like mirrored surfaces and have become a very popular Instagram spot for taking pictures like those of the Uyuni Salt Lake in South America. The number of visitors has increased from about 10,000 a year a few years ago to 500,000 a year now. Not only at sunset, but also in the morning, when the sky is reflected in the mirror on the vast, empty beach, the photos are spectacular. 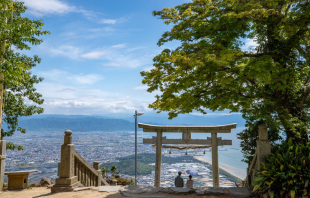 25 minutes by car from URASHIMA VILLAGE

Takaya Shrine, whose main shrine is located at the top of Mount Inazumi at an elevation of 400 meters, is famous for its Torii gate in the sky, which has also become very popular on Instagram. You can drive up to the top, but the hiking course along the approach takes about 30 minutes, so it's good exercise. Once you reach the top, you can see the Seto Inland Sea below.
Photo courtesy of Mitoyo City Tourism Exchange Bureau

About 15 minutes by car from URASHIMA VILLAGE

The cherry blossoms of Shikunodeyama were listed in the NY Times "52 Places to Go in 2019. It is said that the mountain was named after the place where Taro Urashima opened his jewel box and purple clouds appeared. Just gazing at the panoramic view of the beauty of the many islands of the Seto Inland Sea will make you lose track of time. Not only during the cherry blossom season, the hydrangeas are also recommended. 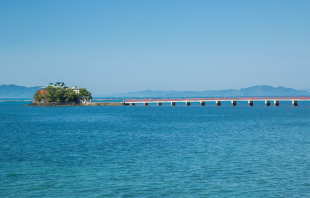 About 20 minutes by car from URASHIMA VILLAGE

The Tsushima Shrine is the guardian deity of children, and is popular because the bridge is opened only once a year on August 4 and 5, the day of the annual festival, and visitors can cross over to the main shrine. "The bridge is also known as the "Happiness Bridge," and as many as 100,000 people visit the shrine over the two days. Tsushima-no-miya Station, a temporary station open only for these two days, is popular among railroad fans, and fireworks are set off in the night sky over the Seto Inland Sea on the 4th.
Photo courtesy of Mitoyo City Tourism Exchange Bureau 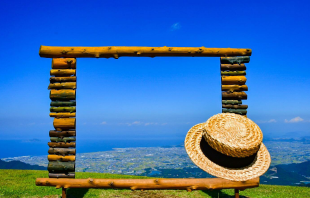 About 40 minutes by car from URASHIMA VILLAGE

Unbeji Temple, the 66th sacred site in Shikoku, is conveniently accessible by a 2,600-meter-long ropeway. Through the windows of the gondola, you can enjoy a panoramic view of the Mitoyo Plain, the Seto Inland Sea, the Chugoku region, and the Seto Ohashi Bridge. Around the foot of the mountain, there are restaurants and souvenir stores in the Unbeji temple town, which is one of the most popular Instagram spots along with Chiboga-hama and Takaya Shrine. 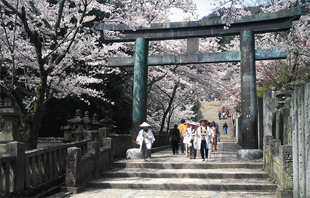 About 40 minutes by car from URASHIMA VILLAGE

The Konpira Shrine, popularly known as "Kompira-san", has been visited by many worshippers since the Edo period (1603-1868). There are 785 stone steps to the main shrine and 1,368 steps to the inner shrine, and you will be blessed just by climbing them. Just enjoying the stores lined up along the approach to the shrine will make you feel like a tourist.

This island is the site of the Setouchi International Art Festival and was once home to a training school for mariners. The "Drifting Post Office," which was also a work of art by Seto Gei, receives letters from all over the country that have no destination. There are restaurants, stores, and bicycle rentals on the island, and a day is enough time to explore. 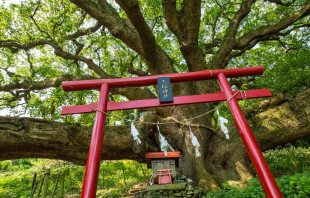 Shizushima is an island with only 20 inhabitants, some of whom are attracted to the 1200-year-old Ookusu tree. It takes about 20 minutes to reach the Ookusu by a light trail, and at the end of the trail is the Kusunokura Observatory, a spectacular spot created by the islanders. At Kusukusu, a rest stop, you will be warmly welcomed by the islanders.
Photo provided by Mitoyo City Tourism Exchange Bureau

From URASHIMA VILLAGE 10 minutes by car to Nio Port, 7 minutes by boat from Nio Port.

An uninhabited island rich in nature that is only accessible by boat from April to October. The boat departs when people gather and returns by calling the captain to pick you up. In the summer, the island is crowded with people who go swimming, fishing, and camping. Why don't you enjoy the blue sky, the blue sea, and the great nature that spreads all around?